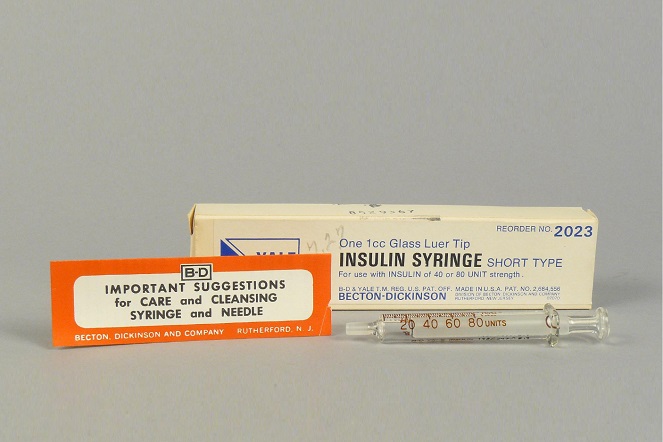 When I was diagnosed, I spent three weeks in hospital.  When I was discharged, I went home with the things I needed to both treat and monitor my diabetes.

Like most people with Type 1 Diabetes, I had a glass syringe and a handful of stainless steel needles.  I stored these in surgical spirit in a glass butterdish.  Once a week I wrapped the syringe in a hankie and boiled it, together with the needles, for 20 minutes.  Whilst it was boiling I discarded the surgical spirit, gave the butterdish a real clean and then filled it with new spirit.

In those days, home blood tests simply did not exist - the only way I could monitor my diabetes was to do a urine test twice a day - see the images below.  I would collect urine in a sample bottle and then put measured amounts of urine and water into a test tube.  Drop in a tablet and the mixture would quickly start to boil.  Once it stopped, I had to shake the test tube and compare it to a colour chart.  Dark blue meant that my urine contained no glucose, dark green meant it contained a little.  The time to worry was if it was yellow or orange, because then there was a lot of glucose present.

In 2015 I stopped doing multiple injectons each day and switched to using an insulin pump - up to that point I had done about 60,000 injections.  Now, instead of urine tests, I get a drop of blood from my finger and apply it to a test strip inserted into a special meter.  Five seconds later it tells me just how much glucose is in my blood.  What's more, if my blood glucose level is high, the meter sends this to my insulin pump, which then automatically adjusts my insulin the next time I am giving myself insulin when I have a meal.  The test meter stores several months results and every so often I can send them to my diabetes consultant who then has a detailed picture of how my diabetes has been doing.  This has been especially useful during the lockdown.

My insulin pump is about 8cm x 5 x 2.5 and weighs about 150 gms.  Now and again I think it's a bit inconvenient with it hanging from my belt or pyjamas 24 hours a day.  But then, I look at the image below of the first-ever insulin pump, and try to imagine what it would be like spending your life connected to that! 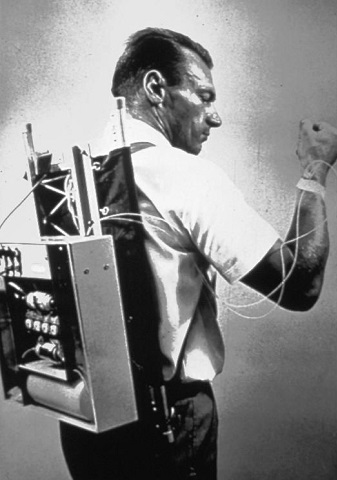